SO excited to share a super fun shop with you all today! Who doesn't like accessories? What about mommy/mini matching ones? I know right? I'm sold on this alone, but seriously seeing what Danielle has done with leather... braiding them and turning them into the most perfect accessories, makes it even more exciting! The quality of the leather is amazing and I love all the many color options she has!! My daughter and I wear ours daily! They're not too thick, not too thin. They have just the right amount of durability and are so easy to put on and take off with just a snap! This is crucial, because how many times have you wished someone else was around to help you put on your fav bracelet? Here's a couple photos of the matching set Nyah and I have, but I'm also going to include some others so you can see all the variety! 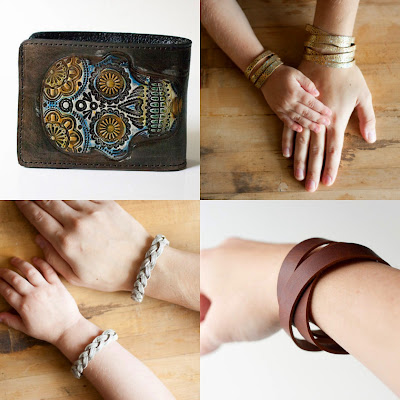 I tend to prefer neutrals mostly, but she has SOOO many colors! Bright neon colors, jewel tones, textured and patterned neutrals, pastel colors, just to name a few! And obviously not only does she have bracelets in a few different styles, but guitar straps, wallets, clutches, and key fobs are among her variety of leather items! I'm so glad she reached out to me, because as soon as I looked at her shop and saw what she had to offer, I knew it'd be a perfect share!! Now that I know first hand how great her items are, I'd encourage you to look for yourself!! Also because her prices CANNOT be beat for the quality you're getting! She has two different websites and trust me, you'll need to see both :) www.flourishleather.com & www.flourishleatherkids.com // clearly one is geared more towards kids with their mommy & me, and daddy & me sets that are to die for, while the other is chocked full of leather goods that us adults could really use in our lives ;) She has so much to offer that two sites makes a whole lotta sense!

Now that you've seen a little preview of what Danielle has to offer, lets meet the lovely lady behind the business! I'm so glad that she decided to take the time to share with me a bit more about herself and what got her started on this venture of hers! Read the little Q&A below!


Where did the name, The Flourish come from?

What inspired/motivated you to start your own business?

I started working at a leather supply store and a co-worker showed me how to make braided bracelets. I thought.... Hmmmm! That could sell! -- So, within a few weeks I opened an Etsy shop and started selling bracelets.

What's something most people wouldn't guess about you?

I have a really dry sense of humor. So much so, that sometimes people can't tell if I'm joking. I'm also insanely afraid of the dark, june bugs, and heights. Oh, and I love eating sauerkraut... right out of the can. I'm weird!

What is something quirky about you?

I think the things that people wouldn't guess about me sort of make me quirky, too. I used to work at a high fashion consignment store before ever entering into the leather business world and I can identify and authenticate about 40 different types of designer brands. My husband calls it a super power but that's probably the only quirky thing about me. I can still name any designer bag on any arm... all the time. Oh, and I did gymnastics for the first 13 years of my life. My mom thinks I can still do some of it,but I actually struggle to reach my toes. :)

What does a typical day in the life of Danielle look like?

My day looks like this:
Kid wakes up, I cook her breakfast.
Babysitter arrives.
I start working, shipping, photographing, answering emails.
I stop working, feed my kid lunch, lay her down for nap.
Keep working, shipping, taxes, post office.
Get the kid up from nap, eat snacks and watch Daniel Tiger's Neighborhood
Cook dinner, clean house.
Run errands
Hang out with dad once he get's home from work.
Beer
Bed
-- Do it all again tomorrow.

What's one of your biggest dreams/goals for your business?

To have my husband be able to stay home with me! That would be most excellent to have him here too.

What advice would you share with someone starting their own business?

Don't do it for success. That's the wrong reason. Do it because you LOVE what YOU are doing. If you love what you do, and you love it with enough passion, someone else will come along and love it, too. That's how you stay happy and creative.


Thanks so so much for sharing, Danielle! I love how determined, hard working, and talented you are! You're business advice is perfect and the quirkier the better ;) At least, that's how I feel about it! Clearly your chaos is very organized!! I love how much you have to offer and how beautiful all the pieces are! On top of that, your dry humor is always appreciated and its been awesome chatting with you behind the scenes and getting to know you better! Thanks for being patient with me and allowing me the opportunity to gush about you and your shop!
Posted by Jessica Smart at 1:46 PM 1 comment:

Before I reached out to her, Stacie and I were kinda following each other and were already friends basically even though we didn't know it. Ok, that doesn't make sense really. But what does make sense, is that she's pretty cool and super creative when it comes to brainstorming new designs for your littles to wear! I love that I've gotten in touch with so many "take charge" kinda gals! Especially those stay-at-home mommy types who have loads of laundry, dishes, butt wiping, kid chasing, carpooling, and feeding mouths on the agenda.... and yet somewhere in there they fit running a business. Yup, pretty mind blowing. Definitely not something to look past or down play. It's a big deal. And what many of you don't know is how hard it is to make that jump! It's a daily test and yet, I'm so encouraged by women like Stacie  who are making it happen and plowing forward!

Her designs are super playful and really speak a kids language. As soon as I saw her creative juices on tees I just knew she had a good thing goin' over there and that at some point I just HAD to share with all of you! Here's some pics of my boys in the cute raglans she sent us. They are super soft of course (American Apparel) and unique. I don't know a single person who has these tees and don't know any store around that would create something this cute. So there :) 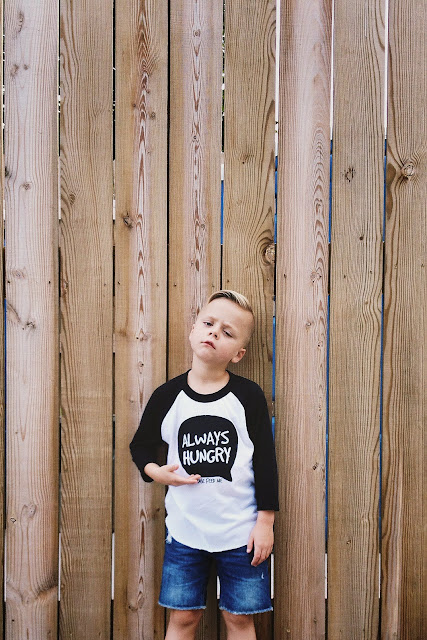 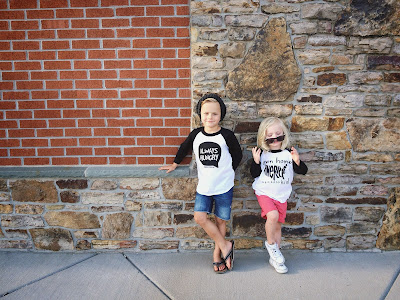 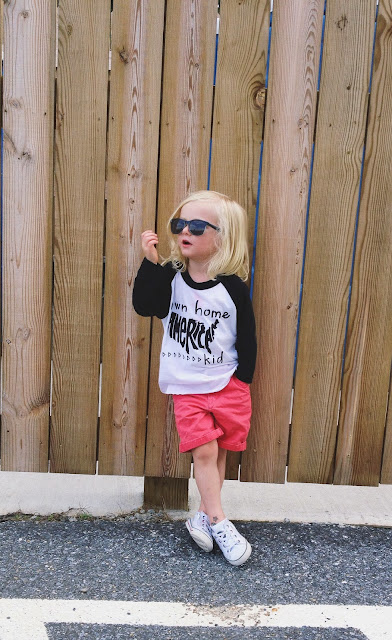 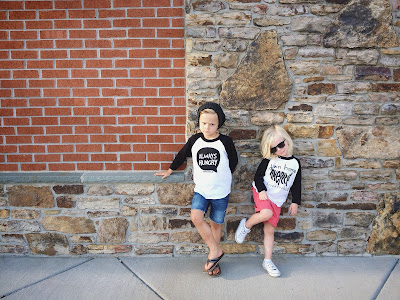 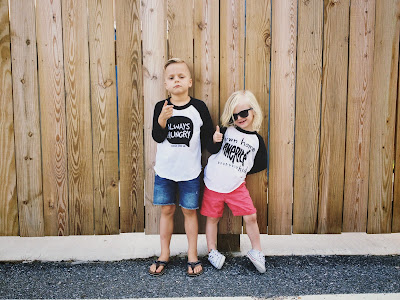 Now that you've gotten a feel for what Stacie's all about, Read the short Q&A I did with her on how she got started and what advice she'd pass on when it comes to starting your own business!


Where did the name Ahoy Amigo come from?

What inspired/motivated you to start your own business?
After having soo many people ask me to make things for them, I decided that maybe the rest of the world would also like me to make them things!! I actually started an Etsy shop called "PolkadotFluff" first (its still around for now) making probably the most random collection of things ever.  At the beginning of this year I set a goal of learning new things.  One of those things was to learn to screen print tees from home.  As most of us tee shops owners claim, there seriously was a lack of hip, modern, rad tees available for little kids in the toddler age range (which both my kids are in).  So I set forth to change that, one eye patch at a time.

What's something most people wouldn't guess about you?
I'm super shy.  Like, I bring a book with me everywhere to use as a buffer in new situations.  well, now I bring a kid, they are such great ice breakers for real! I will avoid calling for a pizza because its a new situation that I've never encountered before and I'm scared!! This business is def changing all that though!!

What is something quirky about you?
AHH!!! I hate these questions!! Um, I've never sang in the shower.  It sounds weird to me!! haha! That's the best I have!!

What does a typical day in the life of Stacie look like?
With two littles under five, there is no typical day!! They are early risers so I usually throw the tv on in my room so I can catch a few more zzzz's while they bicker, I mean, watch tv.  Then its breakfast, chores (we make our beds and put away the dishes, jk I do all that while wishing they helped), then it depends on our moods.  Today we played with homemade slime!! It was pretty gross! haha! I try to get some work done at nap time but I'm usually sucked into the internet thus making my working hours after bedtime (a strict 7:30pm as they usually don't nap).  I work on masterpieces usually until 1:00am, then hit the hay!!

What's one of your biggest dreams/goals for your business?
To have a brick and mortar shop, preferably somewhere near an ocean!!

What advice would you share with someone starting their own business?
Don't be too hard on yourself!! Everyone is at a different place in their business even if they started the exact same time!! Don't get down on yourself just because you didn't make a sale, or someone didn't like your Instagram post!! As long as you believe and don't give up, it will come!!

Thanks so much for sharing Stacie! I love love the advice you gave! I for one am super hard on myself and I think we can all relate to staying away from comparing! Such a tempting thing to do, but what you said is so true and we should def be able to encourage each other along when it comes to successes. And I agree! Kids are excellent ice breakers! I've met some of my best friends through my kids :)

Thanks to all of you for reading my little blog and not only supporting me, but ultimately supporting all of the rad people who put out some real great product that are more than worthy of sharing! Make sure to visit www.ahoyamigo.com and use the code "littleslife15" to receive 15% off your entire order, now till September 28th! Thanks ahead for shopping small friends!!
Posted by Jessica Smart at 9:02 PM 2 comments: 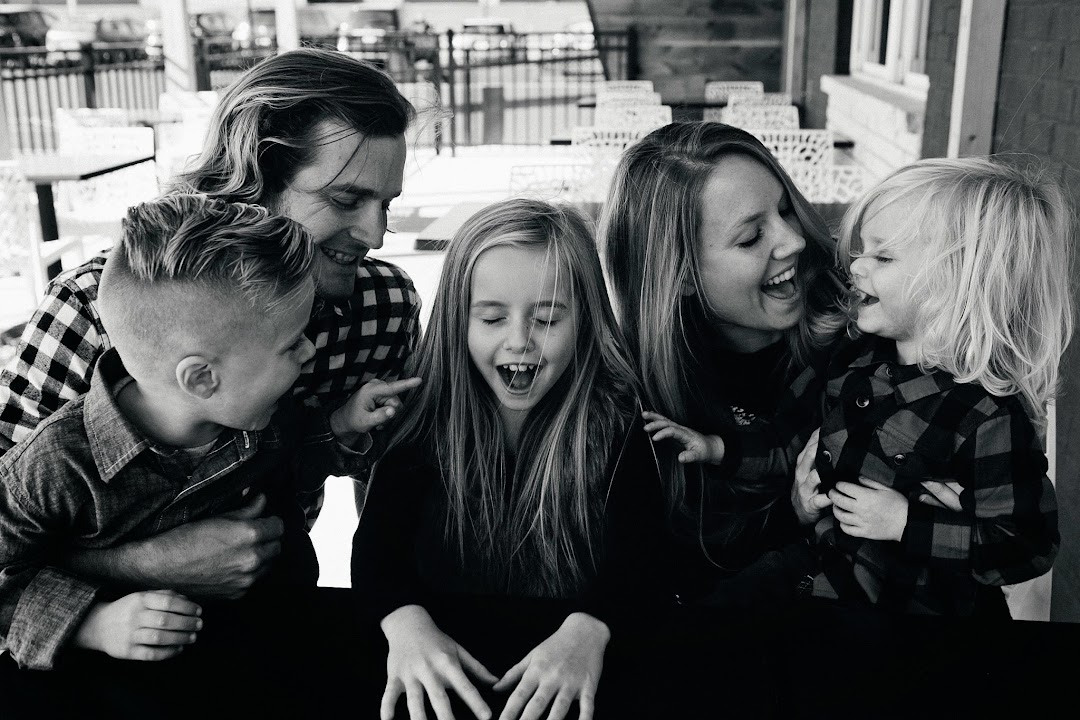 Hey Everyone!! I'm Jessica and this is my little family lifestyle blog dedicated to not only bringing you the latest deals and trends, but also giving you a peak at who's behind these great small businesses that you'll be seeing!!! It's been so much fun getting know some of you out there and hopefully you'll also get a glimpse of me and my life as a wife and mommy of 4 littles as well :) I love feed back and meeting new people so please don't hesitate to contact me!